The demon of Reservation has raised its head once again with the Patels or Patidars demanding to be included in OBC category. The caste based reservation has done a great harm to the country. People in different parts of the country have stirred for reservation from time to time. At present Gurjars in Rajasthan, Patels in Gujarat, Jats in Haryana and Redyy’s in Andhra Pradesh are demanding reservation.

The massive mobilisation of Patels in Gujarat in their agitation for their inclusion in the caste-based reservations scheme as Other Backward Classes (OBC) raises vital questions on affirmative action. For decades, political parties, the media and society at large have avoided serious debate on the promotion of equal opportunity in an iniquitous, caste-ridden society practicing discrimination by birth for centuries.

After the country got independence in 1947, the founders of our constitution considered the inclusion of socially backward classes such as scheduled castes, scheduled tribes which mainly were considered untouchables at that time. Hence the constitution makers thought it appropriate to provide reservations to SCs and STs for a period of 10 years. But this period got extended year by year. Even after 66 years, it has not been reversed.

Now the question is that have we achieved what was intended by the founders of the constitution? A ground reality answer would be “No!” The caste based reservation has created a creamy layer among these backward classes which exploits the benefits of the reservation in education and job promotion. They have become richer and richer while the backward classes of the society have not been able to leverage the benefits of the reservation. Most of the benefits of reservations have gone only to a few, better educated, well-off elites among the communities eligible for reservations. When you see the background of youngsters recruited to the civil services, or those admitted to medical schools, the Indian Institutes of Technology, the Indian Institutes of Management, national law schools or other courses that give real opportunities of vertical mobility, we see a pattern emerging. Though reservation is applicable to the poor and the rich, or the illiterate and the educated in caste groups equally, in reality, most benefits accrue to the children of those who already have the advantages of education, career and wealth. In most selections to/in premier institutions in higher education or recruitment to high-end jobs, it is the children of Indian Administrative Service, Indian Police Service officers and other senior officials, the progeny of Members of Legislative Assemblies (MLA), Members of Parliament (MP) and the other political elite, and the offspring of successful professionals and businessmen who dominate the scene in communities eligible for reservations.

Now, the second question which rises is that of equality? Constitution provides provision for equality based on religion, caste, sex and race. But the Indian society is galloped in a dire situation of inequality. Centuries of artificial division of society into hundreds of castes, the denial of education for all but a few “upper” castes, an unbreakable linkage between caste and occupation, institutionalized untouchability and absurd notions of “impurity”, the long-entrenched tradition of endogamous marriages within a sub-caste, and serious prejudice against mixed marriages are all that have made the Indian caste system the most heinous, oppressive and intractable form of discrimination and inequality by birth.

Coming back on the matter of caste based reservation; it is clear that at present most of the benefits of reservations flow to a few well-educated families in the upper strata. Real poor families among SCs, STs and OBCs are largely on the margins. The poor among Other Categories (OC) are resentful and frustrated, and tend to blame reservations for all their problems. The current form of reservations and zero-sum approach has deepened caste divisions without helping the truly poor, deserving children to advance in life. Most Indians — from castes included in reservation or excluded — feel betrayed. We need an urgent, earnest, honest, national debate, and a creative sensible, pragmatic response. Opportunities for all disadvantaged children, equity, fairness and common sense should be the guiding principles in evolving a more rational model of reservations. 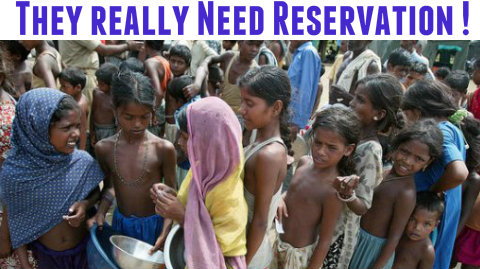 India faces one of the fiercest droughts in decades, farmers are under distress!