Yes, Narendra Modi is world’s best prime minister in Google image search. This result is showing after the ” Top 10 criminals of world” and “World’s most stupid prime minister”. May be now you are amazing how it is possible that google is showing such result in it’s Google Image search.

Most powerful prime minister in the world   Google Search

But before that we want to clear about Indian media and Indian people –> Many news channel presented the articles on “Top 10 criminals of world” and “World’s most stupid prime minister” and many politician and facebook users participated in the comment war. Some were in favour of Google image search and some were favour in Narendra Modi. At that time these result may be possible but many Indian Media channel and Newspaper wrote about the “Top 10 criminals of world” and now they are publishing articles on “World’s most stupid prime minister” 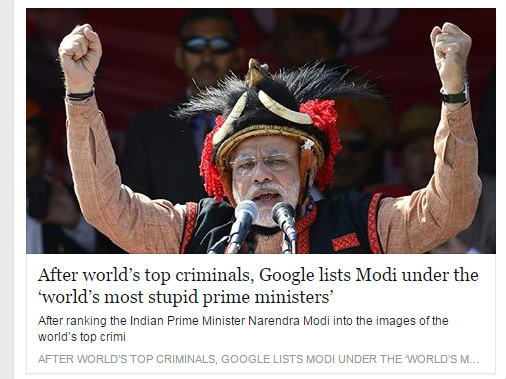 But why time to time media is publishing such articles on Narendra Modi, after a deep research we get the answer and that was for “Cheap Publicity“. By these type of news many people join the discussion over facebook and twitter and this increases the “facebook likes” of these news channels as well as TRP. So they are publishing these type of article time to time to fool people without giving the reason behind it.

But the reason behind this type of result is SEO ” Search Engine Optimization”. This is a technique that is used to increase the visibility chance to show an image in the Google result. So before commenting on facebook like “It’s google’s fault” or “Narendra Modi is stupid Prime minister” or ” Narendra Modi is world’s best prime minister” know about how Google Search work.